As a partner the LBCDA is taking part in the „Joint-Planning CODE” international project within the Hungary-Croatia IPA Cross-border Co-operation Programme. This project is inspired to open up the common tourism development facilities between Medimurje County, Zala County and Lake Balaton Area.

In the organization of the Tourism Community of Medimurje (Turistička zajednica Međimurske) and the Development Agency of Medimurje County (REDEA)the staff of the Social Science Research Team of the LBCDA got the opportunity to travel to Croatia on the 22nd and 23rd of April. To be more exact the team was able to visit the area of Novigrad where they were hosted by the Tourism Agency of Istria County (Turističke zajednice Istre). 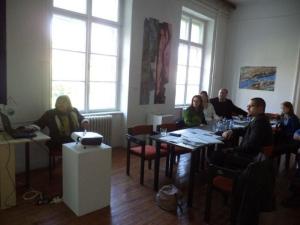 The team set off from Csáktornya in the early morning and arrived to Istria in the afternoon. As the beginning of our program we have visited an extremely friendly family restaurant in Momjan, where the cuisine is specialized on local products. Beside the restaurant owner we were hosted by Denis Ivosevic, head of the tourism community of Istria County. After we ate up the courses based on truffle and wild asparagus we had the opportunity to listen to a thematic presentation about gastronomy, agro-tourism development, and about the elaboration of trade-mark system in inner Istria. Even though inner Istria was in an unfavourable and deteriorating situation earlier, due to the success it has achieved from 1995, nowadays it has a reputation almost as good as Provence or Toscana has on the global tourism market. The program went on. The team visited the 104 years old Kozlovic Winery where we could hear about the problems and also success occurred in the sector. The local Malvazija and Teran types of wine are internationally recognized. During the wine tasting Denis Ivosevic presented us a truly detailed report in which he referred to all segments of tourism in Istria he also presented the specialities of sector strategic planning. In the Istria peninsula there are approximately 22 million guest nights per year. The peninsula is divided into different parts and each of them has one special tourism sector they have been concentrated on. The economic crises brought significant damages in reaching the predetermined goals. Despite all the development in Istria is going on.

The first day was ended in a long wine dinner at the world famous San Rocco Restaurant and Hotel, which represents top gastronomy. Its cuisine is also based on local and seasonal products. 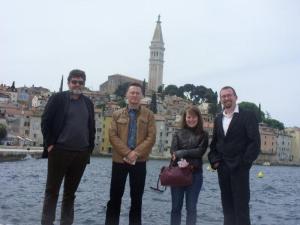 The second day was started by a presentation about the development in cycle tourism. The peninsula takes the lead in this sector’s planning. 1000 km thematic cycle lane with different scale of difficulties was marked out or built up in the last decade. As the second in the world they mapped the whole system by GPS coordinates, so it can be easily reached by tourists. Cycle tourism is also served by special hotels, services, qualified guides, bike loaners and garages. The success is presented by those tourists who bring their bike with themselves; they are approximately the half of all tourists appearing in the region.

After the consultation the team visited a young olive oil manufacturer who presented his work for us step by step. Built up on the given tradition a conscious product development was going on in olive oil production hardly in a decade. Those local oil types which were unknown before became world-class and produce singular standard. Following the Tuscan ones Istrian oils are the second most popular on the world market, so it produces significant income for the manufacturer. In a few years more than 300 new olive trees will become productive.

The two days long workshop was ended in a trip to the beautiful and picturesque Rovinj.

Thanks to the field work we are enriched by some really useful information. Istria’s success lies in the given capacities, and that they are able to take the advantage of them. Besides this the cooperation between the tourism partners, service providers and producers is a good practice to follow. In addition to this the government gives to the counties a not so significant 11% of local taxes to help the development of the region. During the development in Istria they tried to follow the strategy they planned before.

Our Croatian partners will come to Lake Balaton to join us in a field trip in September.